Recently, I’ve noticed how Apple’s product designs have taken a direction towards deception – a gentle sort of deception that doesn’t trick you into thinking the product has something it doesn’t, but a deception that promotes and extends the appearance of certain features so that they appear better. I think it’s a smart way to design products (from a business perspective) as it will make your products seem better than they actually are, all done artificially through appearance rather than function. Here are a couple of examples.

Apple has modified the curves on their computers, from a smooth symmetrical curve to a more gently curved edge that gets cut off at the end, forming a sharp corner. What does this achieve? It makes the device appear thinner as the gentle curve tends to disappear and all you’re left with at the side is the thinner edge that now appears to represent the thickness of the device. This illusion works best when looking up from above rather than directly from the side, as the lower and upper curves disappear. Here’s the old symmetrical curve on the white MacBook: 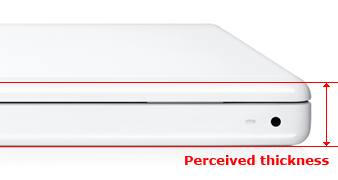 Here’s the curve on the new unibody MacBook Pro. While the perceived thickness I highlighted won’t be evident from looking directly at the side of the unit, it becomes clearer when you view the product from above, as seen in the next picture. It then becomes even stronger when the viewing angle increases towards a more typical one you will have when the notebook is on your desk:

Additionaly, some design elements are now thin and stripe shaped instead of circle shaped. Look at this IR receiver at the bottom of the MacBook Pro: 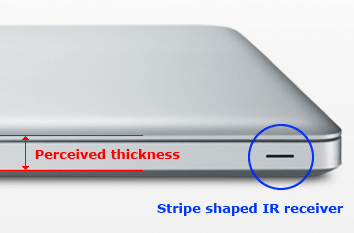 The new stripe shape further emphasizes the thinness of the product – i.e. we can’t fit a circle here so we had to make this a thin stripe.

Another interesting change is the way Apple makes their displays. Gone are the aluminum edges around the sides of the screen – it’s all one big black glass now, right to the very thin edge of the case that it sits in. How does this help? When the screen is off, the screen appears to be bigger than it actually is. This illusion is evident on most of Apple’s new hardware, from iMacs, Cinema Displays to MacBooks and iPhones. Sure, deceit might not be the main point of this design – the glass has to be attached this way and the black bezel helps bring out the colors on the screen – but it’s still a beneficial side effect. 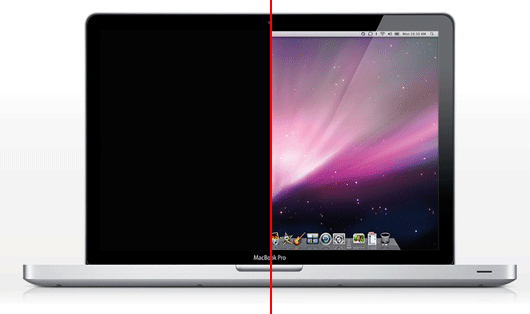 What can we learn from this? I think this illusion element of design is something to think about when designing our products. Is there a way we can shape the design so that it emphasizes the key features we’re trying to promote – whether that be thinness of the case or the size of the screen, or whatever else.

Just like those illusions we’re all familiar with, where one line appears longer than the other when in reality they’re both the same length, the design of your product can have an effect on how that product is perceived, and can positively or negatively influence the appearance of its features.