Guest post by Demetrius Madrigal
Demetrius is a co-founder of ActiveComm Labs, who specialize in user experience and human factors research.

It’s important to make a distinction between these two different research methodologies and the kind of data you get from each. Both involve visiting a participant in their homes or other environments but they are distinctly different. Contextual interviews, which rely on self-report data, and ethnography, focusing on objective behavioral data, are sometimes confused as being the same, but they actually provide different types of data and have different strengths. We’ve had clients engage with us requesting ethnography when what they actually wanted was a contextual interview in a person’s home.

I always make a point of clarifying what they mean as the difference in price and approach between the two can be dramatic. Understanding the differences between these two types of methodologies can help you to more effectively plan your user research, maximizing the value of the research while keeping cost in line. To cut to the chase, here are the different research approaches and their strengths and weaknesses.

Contextual interviews are interviews that are conducted in the context in which the behavior of interest occurs. For example, if someone were trying to understand the needs of doctors, one would interview a doctor in his office or operating room or other relevant location. A typical contextual interview consists of a visit to a home or place of business, usually for an hour or two. The participant demonstrates certain processes of interest for the researcher, such as posting an item for sale on an ecommerce website or sitting down to watch a movie. The researcher asks questions about the process to get a clear understanding of it and identify pain points for the participant. In this way, the researcher can get an inventory of activities in which the participant engages when going through a process. In formal human factors research, this is referred to as a task analysis.

Contextual Interviewing is a superior form of interviewing as it allows the researcher to understand the person’s environment and get actual demonstrations of behaviors of interest. It also has another advantage; it helps the interviewee remember specific details about performing actions. A contextual interview is not perfect. It is a type of self-report research and is subject to the same weaknesses as all other forms of self-report research. People often distort, misremember, or overlook important facts when providing information. These inaccuracies in data are usually unconscious and extremely difficult to eliminate or control. In addition, people can get very accustomed to their pain points, adapting to them and working around them to such a point that they become practically unaware of them. It takes someone objective to identify these kinds of needs.

Thus, while contextual interviews are very useful for identifying more obvious needs, they don’t provide an objective and in-depth understanding of consumers or their needs. There’s always a difference between what people do and what they say they do. 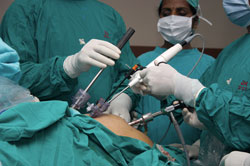 The ethnography that is used in design research was adapted from the field of anthropology in which anthropologists would study different cultures by immersing themselves in the culture for months or years at a time. Design research cannot accommodate the same kind of budgets and schedules as traditional ethnography; however, the principle of in-person observation of behavior remains at the core of ethnography as a research method. In true ethnography, a researcher will spend one or more entire days with a research participant, profiling the person’s life from waking up in the morning to going to bed at night.

In other forms of true ethnography, the researcher may setup a camera and record the participant’s behavior for extended periods of time rather than being in the room with him or her. For example, if you wanted to understand how a surgeon functions with certain instruments when performing a procedure, a camera may be installed above the operating table to record the operation. This allows the researcher to review the recording over and over until behaviors of interest are uncovered.

Like contextual interviews, ethnography has its strengths and weaknesses. Not the least among these weaknesses is the high cost and schedule requirements. Ethnography is definitely one of the more expensive and time consuming forms of research, as a result it is not regularly used, nor is it appropriate for every project. On the other hand, there are researchers like us who are developing new ethnographic methodologies that would reduce costs.

From a methodological perspective, ethnography is subject to participant reactivity sometimes called the “Observer Effect.” The Observer Effect occurs when a research participant alters his or her behavior in response to the knowledge of being observed. A classic example is when a participant performs a thorough cleaning of his home rather than allowing the researcher to see how his environment exists normally. This is one of the reasons why ethnography requires a significant amount of time with a participant, the reason being that the participant’s behavior will gradually return to normal as he or she becomes accustomed to the researcher’s presence.

In traditional ethnography, the participants get so accustomed to the researcher’s presence that the observer effect is believed to be almost eliminated. Unfortunately, design cycles and budgets don’t allow for these kinds of commitments, which can stretch out months or even years. Despite these shortcomings, ethnography is currently the most in-depth form of need-finding user research. It allows the researcher and design team to have a thorough understanding of the consumer and identify needs that the consumer might not be aware of. It is best used when making a major investment into a product that is positioned to revolutionize the market such as email or the automobile.

All research has its place and all research provides value when applied properly. The key is to understand each methodology and where they can be most effectively used. Contextual interviews are an excellent way of understanding consumers and identifying their needs and ethnography is an excellent way to dig deep to identify needs that are more difficult to find. Using ethnography when iterating a current product or technology probably wouldn’t result in much added value beyond performing a contextual interview, but it is essential when creating something entirely new and different.