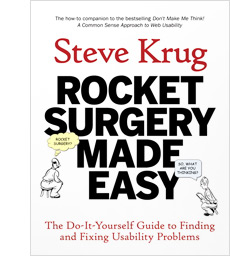 Steve Krug’s new book, Rocket Surgery Made Easy: The Do-It-Yourself Guide to Finding and Fixing Usability Problems is essentially a companion book to his first, very successful book on usability “Don’t Make Me Think”. While the first book focused on design, this new book is all about testing.

The book is split into two parts. The first part is called “Finding Usability Problems”. It’s all about the usability test: how to go about planning it, recruiting testers and finally conducting it. The second part, “Fixing Usability Problems”, covers debriefing after the test and what your next steps should be – i.e. what you should actually do with the information you’ve collected. At the end of the book, Krug briefly touches on remote testing and provides his recommended reading list.

If you’ve read Krug’s first book, “Don’t Make Me Think”, you’ll be familiar with his informal and humorous writing style. There are also plenty of illustrations throughout to keep the content interesting. The book isn’t very long, actually, as the author states himself, it’s “short enough to read on a long plane ride”. I think that’s a good thing. The clear focus, accessible language and length ensure that the book will be read, and hopefully also used. The author’s aim for this book isn’t to turn you into a usability testing expert, it’s to teach developers how to conduct their own small tests that will make a difference in their products.

Indeed, Steve Krug recommends doing each round of testing with as little as just 3 people. This approach won’t give you a long list of problems to solve – and that’s exactly the point. Testing with 3 people means you can conduct the whole round of testing really quickly: test in the morning, and debrief during lunch. You’ll almost certainly discover the really critical issues. The author advises you focus on fixing 10 most important problems, which is enough to make a difference for your users and plenty for your team to get on with.

Throughout the book Krug uses short maxims, for lack of a better name – little snippets of wisdom that summarize the main idea behind each set of recommendations. Some of my favorites are: “Start earlier than you think makes sense”, “Make it a spectator sport” and “When fixing problems, always do the least you can do”. Presenting recommendations in such compact form makes the ideas behind the book much easier to remember.

One great thing about the book is the detailed materials the author provides for conducting your usability tests. For example, there is a full script to follow with your test participants, a script to follow with the observers, a brief form for each one of them to fill in and a checklist for you to go through before and after the test. There is also a video you can watch of a usability test that Krug conducts (you can watch it here).

Krug advocates two approaches to tackling usability problems. The first is: tweak, don’t redesign. Oftentimes you’ll be tempted to do a lot more than necessary. A problem with one or two items in your navigation menu may prompt you to want to redesign the whole navigation. Small fixes and tweaks just don’t have the same good feel to them as a complete redesign – that smell of new paint if you will. But unlike redesigns, tweaks are usually quick and easy to implement. Going off on a redesign will consume all your resources and time, the redesign may get sidetracked or never finished. Small tweaks can be implemented even if you do plan to have a redesign later, and your users will start enjoying the benefits right away.

The second approach is: take something away. That is… literally, take something away from the page you’re working with. The reason people find a lot of sites confusing is because they can’t find what they’re looking for, and they can’t do that because there’s too much other stuff around which they must look through. Taking stuff away shifts more focus on that which remains, so the first thing you should do when trying to fix a problem isn’t necessarily to add something, but to see if you can take something away.

Who this book is for: If you plan to conduct usability testing on your site (or other software products) and are new to it, this book is for you. If you’re thinking about it, then you may also benefit from this book. It will tell you exactly what’s involved, how to do it and what you’re getting out of it.

Who this book isn’t for: anyone who doesn’t plan to test (and are sure about it). While the author does touch a little on actually fixing usability problems, the majority of the book is all about testing and conducting tests, so if you want to read more about the design side of things, get Krug’s first book: Don’t Make Me Think.