The Laws of Simplicity by John Maeda 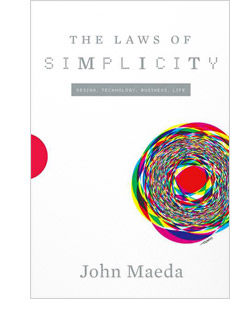 At the 2006 annual TED conference in Monterey, the New York times columnist David Pogue delivered a presentation about the importance of simplicity in business. The commercial success of Google’s simple search engine interface and Apple’s iPod music player show that simplicity sells.

This idea of simplicity as a selling point clashes with the old thinking of constantly adding new features to your product in order to make it more appealing to your customers. Simple products are often thought of as dumbed-down, basic and inferior. But adding features doesn’t mean you get better products – it almost always means you get more complicated products just because the interface has to be expanded to accommodate the new functionality.

The Laws of Simplicity by John Maeda is, as the name implies, an exploration into the lands of simplicity. It’s a book about the nature and soul of simplicity and how simplicity can be applied to your own work and life. The book is structured into 10 laws, with the last one split into 3 ‘keys’.

The first three chapters are directly applicable to software design. The first law is called “Reduce”. Maeda offers a concise method for working with this law called SHE: shrink, hide and embody. Small devices appear simpler to us because on the surface it seems like they cannot contain much complexity in them – there’s just not enough space. Of course this is deceiving because the microprocessor technology in today’s phones and notebooks is very complex and powerful, but you can at least maintain an illusion of simplicity by making your devices smaller. For example, the iPod has a shiny metal surface at the back which reflects everything around it and makes the whole device look slimmer. Today’s LCD monitors usually sit on very thin stands to accentuate their thinness.

Hiding is another great method of making the complex appear simple. For example, when using the Swiss Army Knife you will only really open one knife or tool at a time – the rest remain concealed inside. User interfaces on a computer screen are not constrained by physical space which means you can hide an awful lot of stuff in software. Secondary features and settings are usually tucked away in the menubar.

The simplest way to achieve simplicity is through thoughtful reduction.

Embodying is more a business decision than a technical one. Consumers will only buy smaller and simpler devices if they feel they are powerful enough for their needs. Example: the thin Bang & Olufsen remote control is intentionally heavy, which implies “high quality”.

The second law is called “Organize”. When you can’t reduce and hide any more, organize what’s left into something meaningful. Here again the author offers a method for doing just this he calls SLIP: sort, label, integrate and prioritize. Sometimes you’ll want to squint when looking at your design. Squinting (or looking from further away) lets you see the forest from the trees – i.e. groups will form from individual content elements. Groups are important: they differentiate the different areas and functions of your interface. When you squint, can you clearly see the different groups, or is it all just one big forest of content?

Organization makes a system of many appear fewer

The third law is: “Time”. Here we can utilize the SHE (shrink, hide, embody) method again. For example, the iPod Shuffle music player shrinks time by removing song selection from the process of playing your music tracks – simply hit Play and the device will play songs at random. Same thing with Google’s “I’m Feeling Lucky Button”; instead of looking through search results, just hit the button to take you to the most likely page.

Hiding time is possible. Casinos in Las Vegas have no windows or clocks. They do this to hide the passage of time away from you in order to try and keep you there longer. But this is deceiving. A better way to work with time is to embody it somehow. Here, we have things like progress bars. When you’re performing a some resource intensive task in a software application or downloading a file you’ll almost always see a progress bar. The progress bar shows how much has been done and how much longer the application has to keep working. But it also moves – you can see the computer working and progress made is being visualized for you. Research shows this simple interface element reduces perceived wait time for the users.

Simplicity is about subtracting the obvious, and adding the meaningful

The chapters that follow are also very interesting, though the ideas in them will require more thought into how they can be integrated into your design philosophy.

My only real criticism of this book is this: while all the laws Maeda paints are interesting and insightful, there seems to me a lack of cohesion between them. I can see each law for what it is but I cannot see them all fusing into something clear and concrete. To me the books feels more like an exploration into the uncharted territory of simplicity and in the process manages to plant a few flags here and there, gaining plenty of territory but stopping short of drawing up a clear map of the whole. But even so, the book is worth reading – perhaps even because of this. The “unfinished” nature allows you to draw your own conclusions and interpretations, and more important, it will get you thinking about simplicity and how it can be better applied in the design of your products.

Who this book isn’t for: those who are looking for a clear set of guidelines and formulas to follow during product design. You won’t find this here. However, this doesn’t mean the book won’t help you design simpler products – it will. The Laws of Simplicity is an entertaining and engaging read. Maeda follows his own ideas and delivers his message in concise form at just around 100 pages. The book will get you thinking about simplicity in new ways, which is going to be ever more important as consumers switch to products that are simpler and easier to use.