Just over a month ago I’ve launched Usaura, a simple click testing app. In that time there’s been over 950 tests with over 70k registered clicks. Today I’m releasing a version 2 of the service, which includes a redesigned interface, new features and a new test type. If you want to check it out right now, just head over to usaura.com and try it out.

The old interface was very much a prototype, and while the new one may also change I think it’s on the right track. The design changes focus on making the layout more robust and consistent, while remaining as simple as possible. There are a few CSS3 styles sprinkled over here and there, but mostly I focused on keeping things clean and content centric, cutting back on anything that doesn’t help make the interface easier to understand and use.

One of Usaura’s main features was lack of user registration, you could just go to the new test creation page and fire off a new test. This feature is still there and will remain, but in order to allow better test management I’ve implemented user accounts as well for those who want them.

This is still an early release but you can go and sign up for an account. This gives you access to the tests dashboard which shows all your test, and also shows you more option when creating a new test, including the new test chains feature.

You can now build test chains–a collection of tests sequenced together so that the participants get redirected from one test to the next as they complete them. This is very useful in testing multiple things in one go, for example, seeing how easily the users can find the sign up link, the login link, the support link, etc.

The chain creation page is very simple and lets you edit and remove any part of the chain (just click on each link to select it): 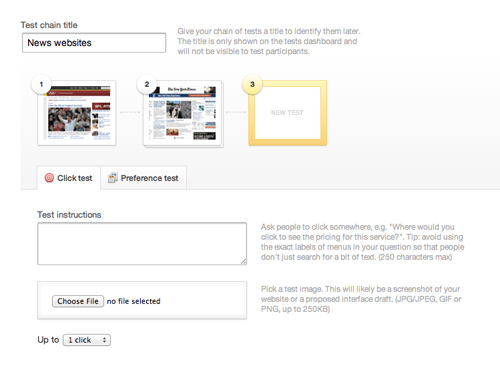 The new version also has a new test type to go alongside the click test: the preference test. This test type lets you ask the participants which item they like best, so for example you could upload variants of your logo or site layout and ask them which appeals most to them. At the moment I’m limiting it to two options for testing purposes, but this will be increased to at least 4 options later after I polish off the way each option is displayed on both the test and the results pages.

Here’s what the preference tests results page looks like: 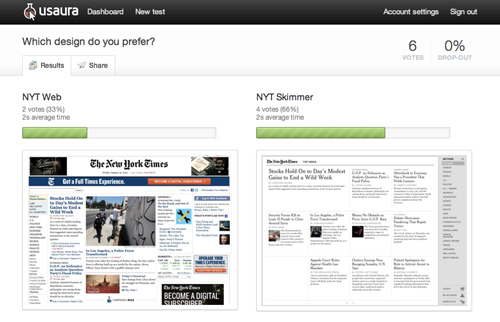 Another new feature is views tracking for each test–i.e. recording how many people have viewed the test. This is used to work out the drop-out ratio, or in other words: how many people have viewed the test but didn’t do anything. This may be because they got confused, or perhaps because they decided not to take the test after all, but its another metric at your disposal.

The public tests feature is gone for the time being. This is because the quality of the tests was too much of a mixed bag. There were a lot of genuine interface tests, but there was also a bunch of junk which needed to be filtered out. This is expected given the lack of registration needed to post anything, so instead of working on stuff like abuse flagging I’d rather focus on the app itself.

I will likely bring public tests back in the near future for registered accounts. For now though it’s bring your own testers, but don’t worry, getting results will be much easier now that you can chain multiple tests together into one test set.

Head over to Usaura.com and give it a try.

As before, Usaura requires a modern browser to function correctly, which means IE9, Firefox 3+, Chrome or Safari 4+. The test pages themselves will work down to IE6, so sharing the tests and getting results should not be an issue.

As always, I’m very interested in your feedback, so please post your thoughts in the comments below or get in touch with me directly.