Here’s an interesting UI concept that Quentin from TOKI WOKI sent me: fluid corners. Go ahead and view the demo here. I think the name isn’t quite right at communicating the idea behind the concept – something like elastic toolbars would probably describe it better. But whatever you want to call it, it’s a very smart way to help keep important controls visible on windows that get dragged partially offscreen.

It works like this: when a window gets dragged offscreen, the controls on the toolbar will shift to fill any remaining space in order to stay visible. This means that important controls like the window close button will remain accessible at all times. Here’s a screenshot from the demo (note the traffic light buttons remaining on the screen while the rest of the window is no longer visible): 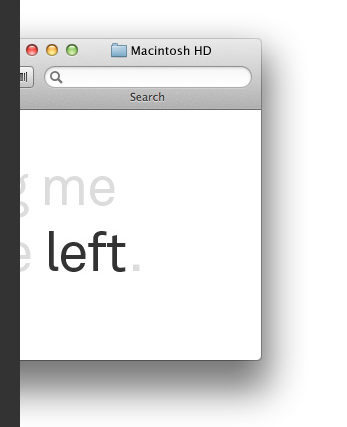 It’s a smart concept and would be useful if it ever gets implemented. What do you think? Post a comment below.