Amazon have just announced some new Kindles, among which a seemingly much improved e-Ink display model they call the Kindle Paperwhite. I’m a fan of the display, and look forward to the improved resolution and contrast, but what saddens me is a continued disregard for good typography on the device. Take a look at this promotional image below: 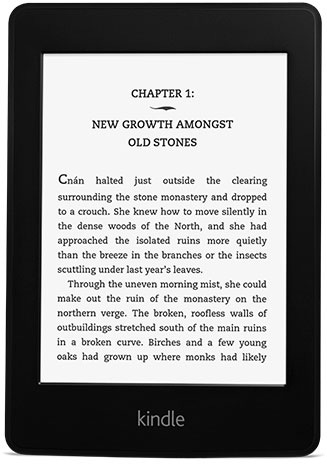 Even though the Kindle lacks a good hyphenation engine, they still justify the text, without giving you the option to left align it. Not all Kindle books have justified text, so it seems the author/publisher has control over the final formatting, but it would still be nice to have the option to use left alignment instead of justified text.

Fully justified text only works when it’s done right, when words are properly hyphenated and when the spaces between letters and words are tweaked ever so slightly to compensate for any space inequalities that still remain. It’s one of the reasons why professionals use expensive software like InDesign to typeset books, and not something standard like Word.

So what’s wrong with fully justified text? Take a look at that horrible word spacing in the first line. The words on pretty much every line are spaced unevenly, alternating between wide and compressed. The worst offender on the above example is the first line, but such lines aren’t rare on a Kindle device, and when they add up we get what’s known as “white rivers”, continuous spaces formed by the combination of words spaced too far apart. It’s ugly, and since the words aren’t equally spaced out, makes the text harder to read. There’s no reason to do it.

Well, there is one reason to do it, and that’s to have a nice block of even text on the page, but this is only applicable when this even block of text can actually be achieved. Stretching words to fill the whole line isn’t it. Here’s an illustration of the two approaches, rags on the left for left aligned text, and white rivers on the right in the case of improperly justified text:

Left aligning the text will give you an ugly rag on the right hand side, but the rag is just what it is, an honest design flaw, a design element wanting more, but not daring to go too far, knowing full well that if it does it will fail. If you don’t have the means to space out the words and letters properly, then please just leave the rag where it is and don’t stretch the lines out to full width, butchering the uniform structure of the text in the process and creating those horrible white rivers that look like cracks upon the face of the page.

Edit: Upon closer inspection of my Kindle, I see that it is a little more nuanced and seems to use some sort of hybrid mode where most lines are stretched out to justify the text, yet in cases where the spaces would be too long the text is set to left alignment. This makes things a little better, though it would be nice to have the option to just have the rag. Also: this hybrid mode isn’t available for the Kindle app on other devices like the iPad or Amazon’s Cloud Reader in the browser.